Prime Minister Pham Minh Chinh on December 28 tasked the banking sector with ensuring monetary security and safety, as well as legitimate rights and interests of people, businesses and relevant subjects in 2023 and the following years. 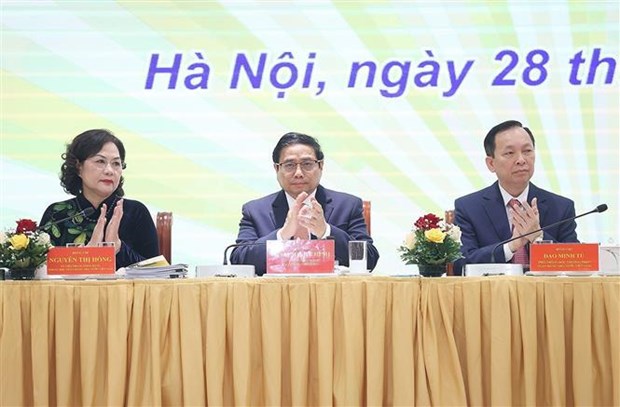 Prime Minister Pham Minh Chinh on December 28 tasked the banking sector with ensuring monetary security and safety, as well as legitimate rights and interests of people, businesses and relevant subjects in 2023 and the following years.

Speaking at a hybrid conference held by the State Bank of Vietnam (SBV) in Hanoi, the leader stressed that the sector should operate transparently and healthily, with liquidity flowing smoothly in any circumstances.

He asked the central bank to keep the exchange rates and interest rates, as well as inflation control and economic growth balanced, and ensure reasonable and effective credit growth, while contributing to removing difficulties in production and business.

Inspections and supervisions should be stepped up to make the system run transparently and safely, he said, calling for efforts to accelerate the restructuring of credit institutions in parallel with bad debt settlement.

The leader also stressed the need to boost digital transformation, as well as the banking system’s role in green development, circular economy, digital economy and innovation.

The sector should closely coordinate with ministries, agencies and localities to fulfill socio-economic tasks, with priorities given to maintaining macro-economic stability, reigning in inflation, spurring growth and ensuring major economic balances, the PM said.

To that end, he suggested flexibly rolling out monetary policy tools and combining fiscal policies with others, saying the banking sector should work to improve its forecasting capacity and prepare for changes in the domestic and international situation.

Perfecting relevant institutions, mechanisms and policies will create a concerted legal corridor for the safe, healthy, effective and sustainable development of the sector, he noted.

The project on restructuring credit institutions in combination with bad debt settlement in 2021-2025 needs to be implemented drastically and effectively, the leader continued.

Lauding the banking system’s outstanding performance in 2022, Chinh emphasised that it has contributed to controlling inflation and maintaining macro-economic stability and high economic growth.

The sector has employed an array of solutions and persified its credit products to help enterprises and people restore production and business, he said, adding that international cooperation has contributed to raising Vietnam’s role at international financial and monetary organisations./.