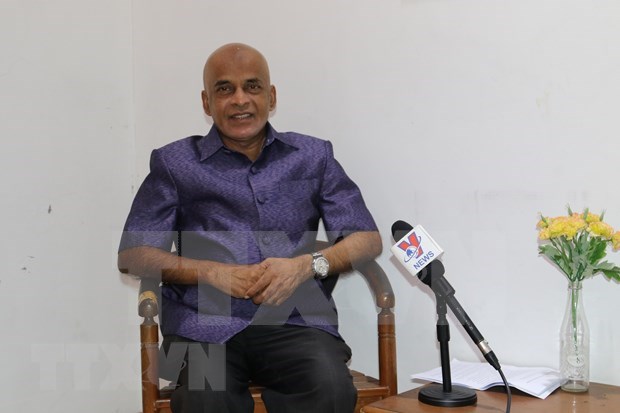 Vietnamese President Nguyen Xuan Phuc’s state visit to Indonesia will mark a new milestone in the unique and old relationship between the two countries, Veeramalla Anjaiah, a senior researcher at the Centre for Southeast Asian Studies (CSEAS) in Indonesia, has said.

Talking with the Vietnam News Agency (VNA)’s resident reporters in Jakarta ahead of President Phuc’s visit to Indonesia from December 21-23, the researcher said that in the fast changing world, both Indonesia and Vietnam are looking for new approaches and ways to deepen their cooperation and friendship to ensure peace, stability and economic development in the region.

Veeramalla, who is also a senior journalist of the Jakarta Post and author of prestigious studies on regional issues emphasised, that: “The friendship between both countries is solid and very old. They are not only very good old friends, maritime neighbours but also strategic partners. Vietnam is a trusted friend of Indonesia.”

According to the scholar, during the visit, Indonesian President Joko Widodo and President Phuc are scheduled to discuss the entire gamut of bilateral relations, recovery from the COVID-19 pandemic, the situation in the East Sea and several other regional as well as international issues.

The two leaders will also discuss ways and means to boost bilateral trade and expand cooperation in many fields. They will discuss investment opportunities in both countries and ways to promote people-to-people links through tourism.

The two leaders will review the strategic partnership between the countries, which will be 10 years-old next year, Veeramalla said, adding that he expected after the visit of President Phuc, the strategic relations between the two countries will reach new heights.

“I expect that both leaders will consider to enhance the existing strategic partnership to a Comprehensive Strategic Partnership (CSP),” he said.

According to the researcher, Indonesia-Vietnam relations witnessed new development steps in recent time. Specifically, in July this year the foreign ministers of Vietnam and Indonesia attended the fourth meeting of the Joint Committee on Bilateral Cooperation in Jakarta and reviewed the progress of Plan of Action for the 2019-2023 period for their strategic partnership. Both ministers agreed to expedite the finalization of the Plan of Action for 2024-2028 as a guidance for bilateral cooperation going forward to further solidify their partnership going forward further. The two countries set a new trade target of 15 billion by 2028. 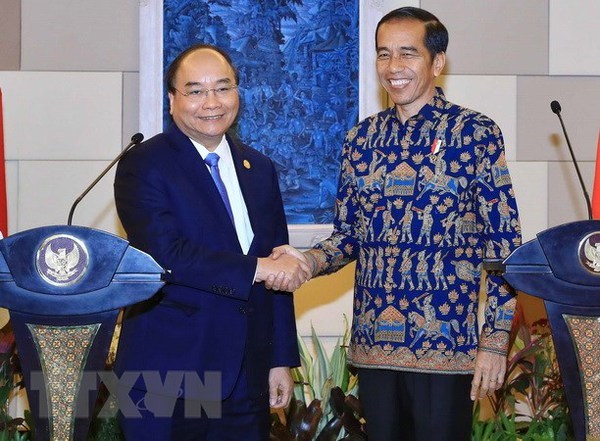 Then Prime Minister Nguyen Xuan Phuc (left) and Indonesian President Joko Widodo met with the press within the framework of his visit to Indonesia on October 12, 2018. (Photo: VNA)

Indonesia and Vietnam have agreed to promote the exchange of delegations and contacts at all levels, reduce barriers in trade and investment, signing at an early date of a Memorandum of Understanding (MoU) on bilateral rice cooperation for the next four years, remove obstacles to create favourable conditions for cooperation in fields of fisheries, high technology and digital economy.

The two countries are currently negotiating an MoU on Combating Illicit Narcotic Trafficking and an MoU on Counter-terrorism.

Veeramalla emphaised that the close friendship among the leaders of both countries is the key to the relationship between Vietnam and Indonesia. Last year Vietnamese Prime Minister Pham Minh Chinh visited Indonesia and held talks with President Widodo.

In August 2022, General Secretary of the Communist Party of Vietnam Nguyen Phu Trong held a telephone conversation with President Widodo. The Party chief proposed that both countries must cement their relations and deepen economic cooperation and cooperation in defence and security.

In November 2022, PM Chinh had a bilateral meeting with President Widodo on the sidelines of the 2022 ASEAN Summits in Phnom Penh. Then comes the visit of President Phuc to boost bilateral ties and economic cooperation.

Talking about potential and opportunities for the two countries’ cooperation in the coming time, Veeramalla said that with its 1.36 trillion USD economy (GDP) and 280.77 million population and vast natural resources, Indonesia is undoubtedly a promising and dynamic country.

Vietnam has recorded an impressive GDP growth during the first three quarters of this year despite of COVID-19 and the threat of global recession.

Both countries have huge potential to cooperate with each other in various areas such as agriculture, fisheries, energy, tourism, education, culture and defence.

As both Indonesia and Vietnam are key players in the ASEAN region, they have similar perceptions about achieving a common goal of ASEAN community and maintaining peace and security in the region, especially in the East Sea.

He added that last year both countries agreed to maintain ASEAN’s shared positions on the East Sea issue, effectively implement the Declaration on the Conduct of Parties in the East Sea (DOC), and early conclude negotiation on an efficient and effective Code of Conduct in the East Sea (COC) in line with international law, including the 1982 UN Convention on the Law of the Sea (UNCLOS).