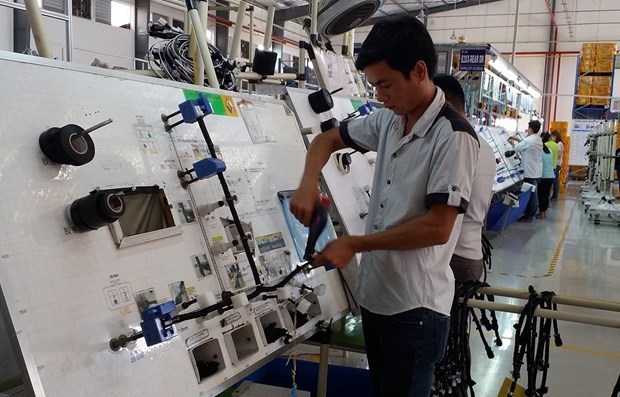 As of September 2022, the RoK had run some 9,438 valid projects worth 80.5 billion USD, ranking first in terms of registered capital and project number in Vietnam. (Photo: VNA)

The trade turnover between Vietnam and the Republic of Korea (RoK) reached 66.8 billion USD in the first nine months of this year, up 18.2% year-on-year, and the set target of 100 billion USD will be fulfilled by 2023 if the pace is maintained, heard a meeting in Hanoi on October 28.

The 19th meeting of the Intergovernmental Committee for Economic–Commercial and Scientific–Technological Cooperation was co-chaired by the Vietnamese Ministry of Planning and Investment (MPI) and the Korean Ministry of Foreign Affairs.

It reviewed cooperation between the two countries since the previous meeting, and outline cooperation orientations in the time ahead. Specifically, participants compared notes on solutions to forge collaboration in trade, investment, labour and social affairs and development cooperation.

The MPI reported that the Vietnam-RoK relationship has made progress across spheres over the past years. Since the establishment of the bilateral diplomatic ties 30 years ago, cooperation between the two countries has seen outstanding developments in all fields, bringing interests to both sides and helping promote mutual trust and understanding.

As of September 2022, the RoK had run some 9,438 valid projects worth 80.5 billion USD, ranking first in terms of registered capital and project number in Vietnam, according to Do Van Su, head of the MPI’s Foreign Investment Agency (FIA).

He noted that Korean firms continue playing an important role in the Vietnamese economy, making up about 30% of the country’s combined export value.

MPI Deputy Minister Tran Quoc Phuong stressed the significance of both new and existing projects to Vietnam in the context of the global economy and trade recovering after the COVID-19 pandemic.

Therefore, Vietnam will create the best possible conditions for Korean firms to invest and expand operations in the country, he pledged.

Regarding official development assistance (ODA), Director of the MPI’s External Economic Pham Hoang Mai noted that Vietnam has received about 20% of the RoK’s total ODA.

The East Asian nation’s total assistance to Vietnam has been valued at more than 500 million USD recently, with 90% ODA and 10% non-refundable aid, the official added.

In terms of development cooperation, priorities have been given to transport and urban infrastructure, health care, education-training, environment, clean energy and IT.

Apart from ODA, the RoK has been ready to provide Vietnam with preferential credit loans through a financial cooperation framework to support the Southeast Asian nation in implementing large-scale infrastructure projects.

The two sides agreed to step up exchanges and the sharing of information in the time ahead.

Vietnam will call for more the ODA and preferential loans from the RoK, and suggest the country facilitate Vietnam’s export of some agricultural products and food, and joint efforts to raise the two-way trade to 100 billion USD by 2030 and 150 billion USD by 2050./.