The volume of Vietnam’s pepper exports to important markets has decreased this year, but the country has retained its top spot in the global rankings, heard a conference held in Ho Chi Minh City on December 21. 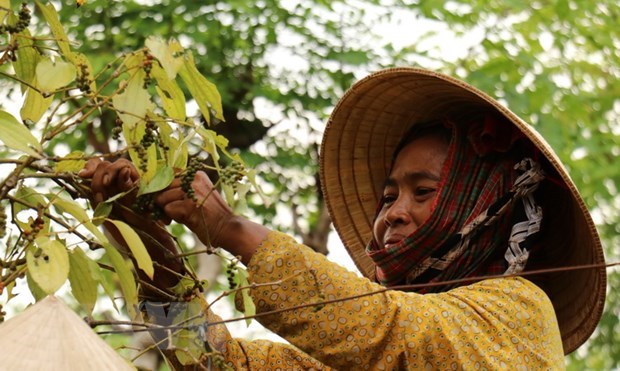 The volume of Vietnam’s pepper exports to important markets has decreased this year, but the country has retained its top spot in the global rankings, heard a conference held in Ho Chi Minh City on December 21.

At the event held by the Vietnam Pepper Association (VPA), experts discussed the promotion of the export of pepper and spices under the EU-Vietnam Free Trade Agreement (EVFTA).

VPA Chairwoman Hoang Thi Lien said in 2022, the product was at a disadvantage due to inflation and economic recession in many markets, and China’s “Zero COVID” policy, hence a reduction in export volume.

According to preliminary statistics from the VPA, Vietnam has shipped about 230,000 tonnes of peppercorns overseas this year for more than 970 million USD, down 13% in quantity but up 2% in value annually. The export turnover of all spices is forecast to hit 1.5 billion USD.

In addition to exports, Vietnamese enterprises also import pepper from other countries such as Brazil and Indonesia for processing, then re-export for higher value. From the beginning of the year to the end of November, the nation purchased 34,273 tonnes of the product, an increase of 48.9% against the same period in 2021.

Lauding such outcomes despite multiple difficulties, Lien noted that Vietnam has an advantage over other pepper production countries such as Indonesia, Malaysia, India, Sri Lanka and Cambodia thanks to the EVFTA. Under the trade pact, the EU’s import tax on Vietnamese ground pepper has been reduced from 4% to 0%.

The Vietnamese industry is also highly appreciated for its processing capacity, as the proportion of processed goods currently accounts for about 30% of its total export turnover, she added.

The expert suggested the sector work to capitalise on untapped potential in many markets, particularly Eastern Europe.

Other participants recommended enterprises change and adapt to meet requirements and standards in import markets, especially the high-end segment.

It is also necessary to identify the strengths and price strategies of their products, conduct market research, and attend trade fairs, they said./.