Party General Secretary Nguyen Phu Trong had a meeting with Chinese Premier Li Keqiang in Beijing on November 1, during which he affirmed that Vietnam attaches great importance to and places the development of ties with China at top priority. 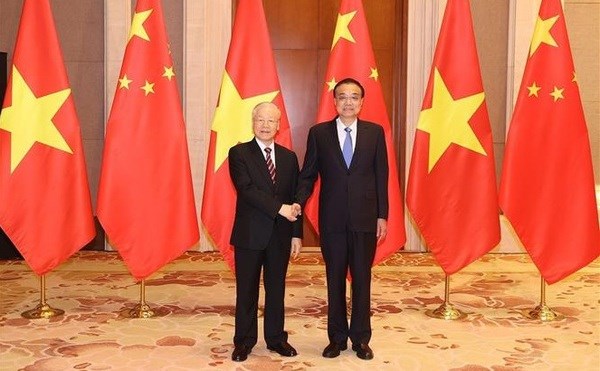 Party General Secretary Nguyen Phu Trong had a meeting with Chinese Premier Li Keqiang in Beijing on November 1, during which he affirmed that Vietnam attaches great importance to and places the development of ties with China at top priority.

Congratulating China on the success of the 20th National Congress of the Communist Party of China (CPC) as well as great achievements that the country has gained so far, the Party leader said he hopes the Party, State and people of China will successfully implement the Resolution of the congress.

Briefing Li on the outcomes of his talks with CPC General Secretary and State President Xi Jinping, he lauded the Chinese Government’s important contributions to the reinforcement and development of the relations between the two countries.

He suggested that with their important role, the two Governments direct ministries, sectors and agencies to successfully realise cooperation agreements reached between the two sides during this visit. 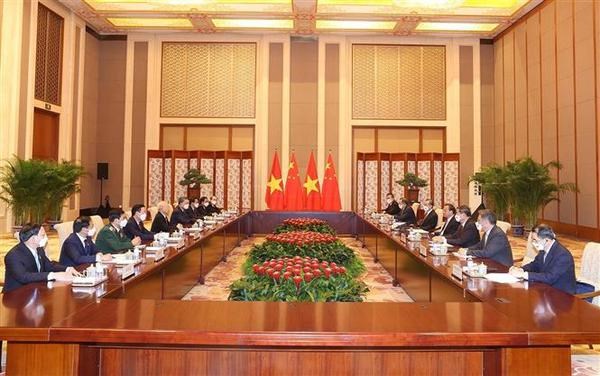 An overview of the meeting (Photo: VNA)

The leader highlighted that Vietnam and China are close neighbours sharing long-standing friendship and many similarities in political regime and development path. The two Parties, countries and peoples have given each other priceless support and help during the past struggle for national independence and the current socialism building, he stated, adding that Vietnam has stayed persistent to the “One China” policy.

For his part, the Chinese Premier expressed his belief that the visit by the Vietnamese Party leader will contribute to promoting the comprehensive strategic cooperative partnership between Vietnam and China in a healthy, stable and sustainable manner in the new period.

Affirming that China attaches great importance to developing relations with Vietnam, Li highlights the similarities between the two countries.

He said he believes that under the leadership of the Communist Party of Vietnam (CPV) led by General Secretary Trong, the Party, State and people of Vietnam will successfully implement the Resolution of the 13th National Congress of the CPV as well as the country’s goals for 2030 and 2045.

At the meeting, the two sides shared delight at the positive and healthy growth of the relationship between the two Parties and countries over the years. They agreed that in the new development period of the two Parties and countries and amid the current international situation, the two sides should further strengthen cooperation in all fields, while maintaining high-level exchanges and contacts, fostering political trust, beefing up trade and investment collaboration, and creating a material foundation and motivation for the development of the bilateral partnership.

The two countries should also work together to ensure stable and sustainable development of trade ties, while strengthening cooperation in maintaining the stability of the supply chain, coordinating with each other and making full use of free trade agreements, and increasing the strategic connectivity to contribute to the post-pandemic recovery and development, they concurred.

They also agreed to enhance coordination at multilateral, regional and international forums, and working together to maintain peace and stability in the region./.