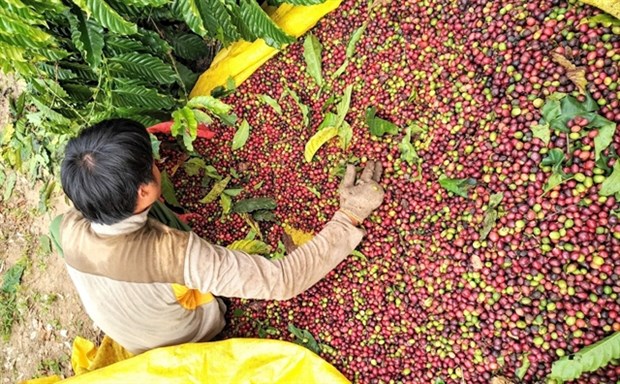 Vietnamese coffee industry has made steady headway in the international competitiveness rankings with a processing capacity of 2.36 million tonnes per year, according to Deputy Minister of Agriculture and Rural Development Phung Duc Tien.

Tien was speaking at the international conference on coffee on December 11.

“With farmers of great industry and firms of great adaptability, Vietnam has moved up to the top of the world’s largest robusta coffee producers,” said Tien.

Amid the unfavourable global conditions, he urged the Vietnam Coffee Cocoa Association (Vicofa) to push ahead with sustainable development, focus on intensively-processing methods, and promote Vietnamese coffee culture to expand its global footprint.

Le Van Duc, deputy director of the Plant Cultivation Department, Ministry of Agriculture and Rural Development, said Vietnam is among the countries with the highest coffee yield in the world. It also secures the 6th position in terms of coffee-growing areas.

The EU is its largest importer, consuming 42% of its coffee export. Asian countries come second, and the US comes third with 10%. By types of coffee, robusta makes up 75% of the export whereas around 20% go to processed coffee.

“We hope that processed coffee would take a bigger share of the pie in the short term,” said Duc.

He called on the Vietnamese coffee industry to shift its focus to intensively-processing methods to improve its position in the international scene. He also suggested integrating digital technology into coffee production to enhance the links among players along the supply chain.

Do Ha Nam, Vice President of Vicofa, remarked that Vietnamese coffee exports normally reach a peak between December and March and fall off peak afterward. In the first six months of 2022, the figure topped 1 million tonnes, the highest in the past several years.

Out of 10 large coffee exporters in Vietnam, six are Vietnamese companies and four are foreign-direct-investment-financed ones, indicating that the latter are well positioned to expand domestically.

Nam called for more favourable bank loans to coffee farmers to help them improve their yield. He also called for a complete ban on the use of glyphosate agents in coffee farming to prevent water contamination.

As urban migration is expected to cause labour shortages in coffee farms in the long term, mechanisation is the only option for coffee producers to pick up the slack and keep output stable.

Vanusia Nogueira, executive director of the International Coffee Organisation (ICO), remarked that global coffee prices go up and down in a cycle of two to three years over the past 20 years.

“When prices are high, producers become excited and cultivate more coffee plants. Consequently, they have huge production in about two to three years, leading to falling prices afterward,” said Nogueira.

The executive director suggested three likely scenarios for global coffee consumption by 2030. One of the scenarios was that the consumption would grow by 2.5% annually in the next eight years, reaching 48 million 60-kg-bags in 2030.

Victor Mah, President of the ASEAN Coffee Federation and ASEAN Coffee Institute, claimed that the two organisations are committed to giving full support to all their members in promoting domestic coffee consumption as well as trade activities for ASEAN coffee.

“With an estimated annual coffee export of over $3.9 billion, Vietnam plays a vital role in uplifting the whole ASEAN coffee sector,” said Mah.

He also said that Vietnamese coffee producers need to keep the sustainability of farmers top of their minds to be able to gain ground internationally.

“As we are entering a period of climate change, the sustainability of farmers is a big factor that will affect our coffee production in the years to come,” he added.

According to Ablede Komlan, in charge of the Coffee and Coco Research Center in Togo, Vietnamese coffee producers should work to unlock the full potential of the domestic market before proceeding to expand their market reach elsewhere.

“There are a lot of coffee shops in Vietnam. That means the domestic consumption of coffee will create jobs,” said Komlan.