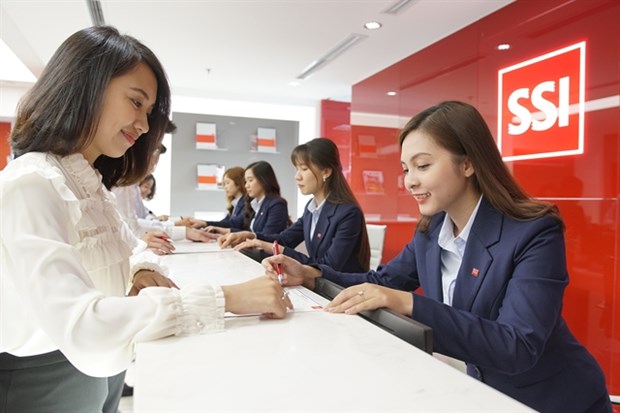 An investor registers for a new trading account at an office of SSI Securities Corporation in HCM City. (Photo: ssi.com.vn)

The capital scale of securities companies has grown robustly in the past two years. In the context of the current sharp decline in market liquidity, this resource is somewhat redundant, and the race to attract customers is heating up.

VNDirect Securities has recently launched the DSTOCK app for securities trading customers, besides the current VND app for multi-asset trading including stocks, bonds, assets, to provide in-depth information and data.

Nguyen Vu Long, Acting General Director of VNDIRECT, said that the company has designed product packages meeting different investment goals of customers. With the asset accumulation model, each month investors can deduct from 5 to 7 million VND (213 to 298 USD) to accumulate stocks for long-term asset growth.

In early August, this company applied a preferential loan interest rate from 8.9% per year for the top 50 stocks with good fundamentals and the highest liquidity in the market.

SSI Securities Inc, the securities company with the largest charter capital in the market, also has a 7-day interest-free package for customers who need to use margin for no more than 30 days. From T 8 trading day, the applicable interest rate is 14.5% per year.

This figure does not include securities companies that have just completed raising capital since July 2022. For example, SSI has increased its capital to nearly 14.9 trillion VND, an increase of nearly 5 trillion VND compared to June 30, 2022. Techcombank Securities Co (TCBS) also recently announced to increase its capital from 1.13 trillion VND to more than 9 trillion VND.

The trend of digitisation has become the dominant trend in 2020, when the COVID-19 pandemic hit strongly. Many securities companies have applied eKYC to attract customers and at the present stage, they are gradually applying synchronous digitisation, investing in more upgraded interfaces and features. Viet Capital Securities, the company with the largest market share for institutional customers, is also aiming to increase its inpidual brokerage market share further by restructuring the brokerage pision, focusing more on the needs of target customers.

Vietnam is a stable growing economy and is witnessing an increasing middle class and an increasing number of inpidual investors. Statistics from the Vietnam Securities Depository show that, by the end of July, there were 6.3 million securities accounts, of which 97% were personal accounts. This figure is only close to 6% of the total population of more than 100 million people, while in Thailand it is 9%, and in Taiwan 90%.

According to experts from Maybank Securities Company, with Vietnam continuing to rise to an emerging market position, it is expected that the total trading volume of the Vietnamese stock market will be equivalent to that of other countries in the region such as Thailand. Vietnam’s stock market has significant growth potential when the trading value only reached 1 billion USD per day, compared to about 3 billion USD in Thailand./.