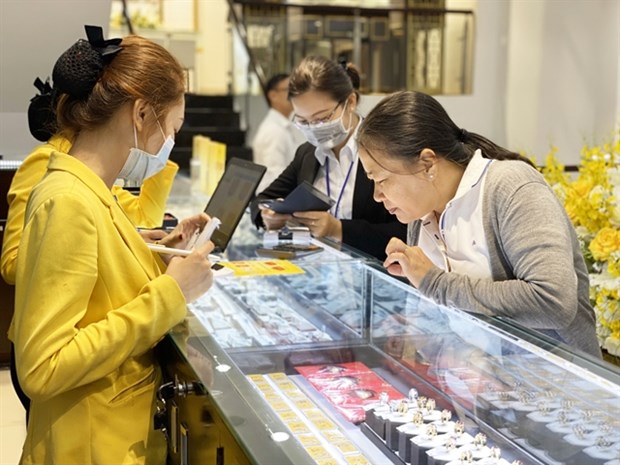 A PNJ store in HCM City. The company reported profit after tax of 147 billion VND in October, up nearly 23 per cent over the same period last year.(Photo courtesy of PNJ)

Of them, Vietnam Equity Fund became a major shareholder of FPT Retail after raising the ownership rate of FRT shares to over 5%. DC Development Market Fund has bought more PNJ shares, bringing the holding volume to more than 3.7 million units, equivalent to an ownership rate of more than 1.5%. Foreign funds are holding more than 9% of PNJ shares.

Many inpidual investors also put their faith in retail stocks. Nguyen Van Thang, living in Hoang Mai district, Hanoi said: “Previously, despite the general impact of the market, FRT was still stable because of the long-term prospects of the business. I have faith in this stock.”

Mohammad Mudasser, leader of PwC Vietnam’s working capital management consulting service, said that investors should consider stocks in the consumer-retail sector, because based on people’s income and increasing young population, this industry has great potential.

Regarding the stock market outlook, Nguyen Trong Dinh Tam, deputy director of investment strategy at SSI Research, SSI Securities Company (SSI), said that the market was confirming the short-term uptrend with soaring sessions. The VN-Index recovered strongly from nearly 900 points in mid-November to 1,080 points at the end of last week, equivalent to an increase of 20%, with high liquidity.

PNJ has just announced business results in October 2022 with revenue of 2.96 trillion VND (124 million USD), up more than 42%. Profit after tax reached 147 billion VND, up nearly 23% over the same period last year.

FPT Retail’s revenue is expected to remain positive thanks to the record-high iPhone orders and increased TV sales for the 2022 World Cup.

However, FPT Retail was under competitive pressure after Mobile World Group (MWG) established the Topzone chain – a chain of stores specialising in providing genuine Apple products – which could directly affect the revenue of Apple products, which accounts for one-third of total sales of FPT Shop and F.Studio chains of FPT Retail.

The growth momentum of FPT Retail’s Long Chu pharmacy chain may be affected by the fact that the demand for drugs and medical supplies is no longer as high as during the COVID-19 pandemic. Competitive pressure in the market is gradually increasing, partially due to newly-opened Mobile World Group (MWG)’s An Khang pharmacy chain.

However, recently, the Board of Directors of FPT Retail approved a resolution to contribute an additional 225 billion VND to the FPT Long Chau Pharmaceutical Joint Stock Company, corresponding to buying 22.5 million more shares at the price of 10,000 VND per share, thereby increasing the ownership rate from 85.07% to 89.83% of the charter capital of Long Chau.

For MWG, the revenue in October 2022 decreased, in which the revenue of all three store chains, namely Mobile World, Dien May Xanh and Bach Hoa Xanh, was lower than expected, showing the initial impact of inflation on the purchasing power of consumers.

Bach Hoa Xanh is gradually closing the gap with traditional markets and supermarkets, expecting to attract more new customers thanks to convenience factors, which is the main driver for revenue growth in the future.

Vincom Retail Joint Stock Company (VRE) expects the retail rental segment to grow positively in 2023. Its profit in the first nine months of 2022 reached 1.94 trillion VND, an increase of 63% over the same period in 2021, mainly thanks to the simultaneous opening of big brands at Vincom shopping centres.

According to Viet Capital Securities Company, Vincom Retail may open new shopping centres in 2023, affirming its position as the leading commercial centre investor in the industry.

According to Nick Bradstreet, Savills’ Asia-Pacific Head of Retail, Vietnam is one of two prominent retail markets in Southeast Asia besides Thailand. Globally, especially companies with offices in Singapore are researching investment opportunities in this country./.