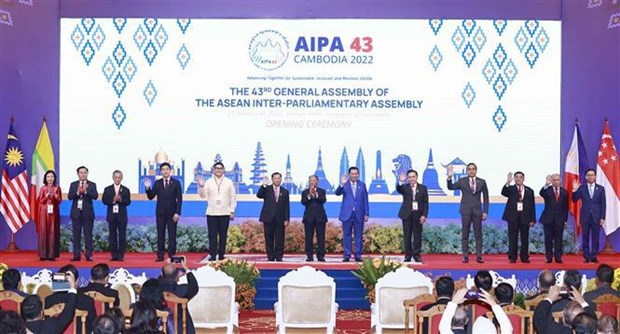 In his message, the President affirmed that the Vietnamese National Assembly (NA) will continue to strongly contribute to the cooperation and development process of AIPA for a resilient, inclusive and sustainable ASEAN Community.

He also spoke highly of AIPA’s strong development and cooperation over the past decade, as well as the support of AIPA member parliaments for ASEAN member states’ governments in maintaining peace, security, stability and development in the region.

NA Chairman Vuong Dinh Hue led a high-ranking delegation of the Vietnamese NA to attend the opening of AIPA 43.

In his greeting remarks, Cambodian Senate President Samdech Say Chhum stressed that parliamentary partnerships need to be further strengthened to realise an ASEAN Community which can benefit all nations.

Through AIPA, parliaments of ASEAN member nations need to boost synergy with partners in their governments in order to further promote sustainable recovery and support people-oriented and people-centred development, towards building sustainable community that is ready to deal with future crises, he said. 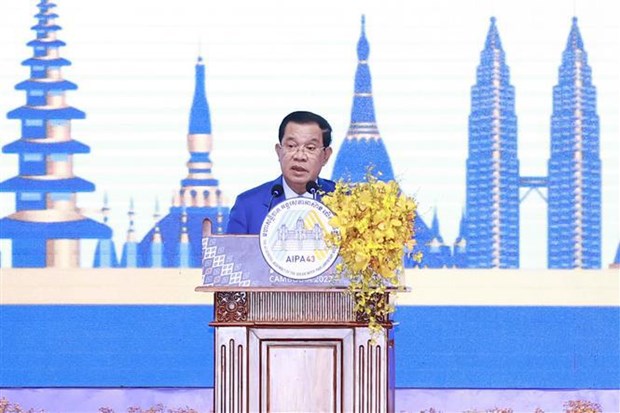 Meanwhile, Prime Minister of Cambodia and Chairman of ASEAN Samdech Techo Hun Sen expressed the pleasure at intra-bloc cooperation over the last three years to successfully control the COVID-19 pandemic and accelerate post-pandemic economic recovery in the spirit of understanding and mutual assistance.

In opening the AIPA-43, President of the Cambodian National Assembly and Chair of AIPA 43 Samdech Heng Samrin stressed that legislatures must play an important role in promoting new development models that take into account the balance between environmental protection and inclusive and sustainable economic growth, towards realising the goal of a sustainable ASEAN.

He emphasised the need for ASEAN member countries to join hands in promoting recovery in the region, especially in climate change adaptation, clean and renewable energy transformation, green investment and green and fair finance.

He also called for action-oriented and problem-solving discussions at the AIPA-43./.