A supervisory delegation of the National Assembly (NA) held a meeting with the Ministry of Finance (MoF) on August 23 to look into the implementation of policies and laws on thrift practice and wastefulness prevention during 2016 – 2021. 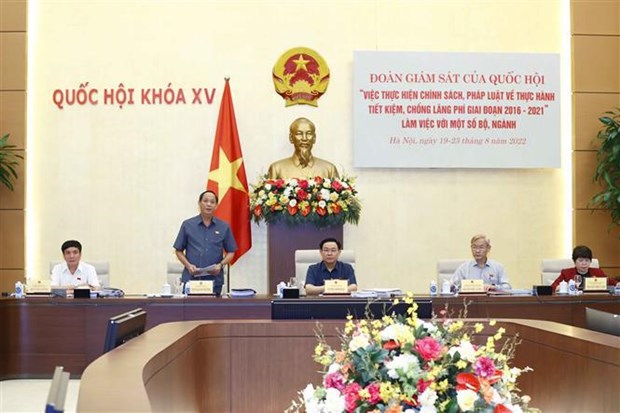 A supervisory delegation of the National Assembly (NA) held a meeting with the Ministry of Finance (MoF) on August 23 to look into the implementation of policies and laws on thrift practice and wastefulness prevention during 2016 – 2021.

In the period, units of the MoF saved nearly 6.09 trillion VND (260 million USD) from the making, verification, and approval of State budget uses; scrapped ground-breaking or inauguration ceremonies; cancelled or suspended unnecessary or ineffective projects; reduced 1,166 personnel on the payroll; and cut the number of non-business public units to 26 from 36, according to the MoF’s report delivered by Minister Ho Duc Phoc.

The MoF also asked localities to save over 10% of their regular expenditure and 70% of trip- and conference-related expenses during 2020 – 2021.

Across the country, about 350 trillion VND in the State budget spending was saved and six district-level and 546 communal-level localities were cut. Up to 74,443 people were removed from the State payroll during 2015 – 2020.

Through inspections and examinations, the MoF proposed 181 trillion VND and 7,675ha of land be recovered for the State, the ministry said.

At the meeting, NA Chairman Vuong Dinh Hue emphasised the must for complying with the spirit of the Law on Thrift Practice and Wastefulness Prevention, which is performing a task at a lower cost and using the same resource to generate higher added value.

Another aspect of the practices is to amend and perfect regulations and policies to remove bottlenecks in terms of personnel, material, and financial resources, he noted, asking the MoF to review existing legal documents on public services, regular expenditure, the reform of the pay system, bond issuance, and the road map for tax reform and transfer pricing prevention.

The ministry should also further advise the Government about the settlement of build – transfer (BT) and public – private partnership (PPP) projects, and the adherence to legal rules on public debt management, the top legislator added.

For his part, NA Vice Chairman Tran Quang Phuong told the supervisory delegation to take in the Chairman’s opinions to complete its supervisory report. He requested the MoF to clarify objective and subjective causes of shortcomings in thrift practice and wastefulness prevention, and propose revisions to relevant regulations and policies to the NA and Government./.