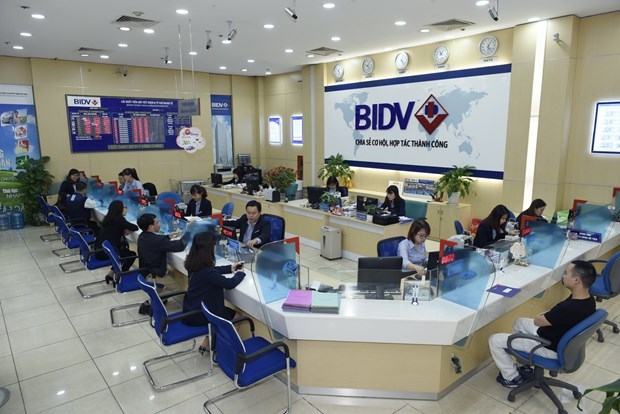 Customers make transactions at a BIDV office in Hanoi. After the central bank raised the credit growth cap, BIDV has been allowed to lend an additional 27 trillion VND. (Photo: VNA)

The State Bank of Vietnam (SBV)’s recent decision to revise up the 2022 credit growth target of the banking system has eased access to bank loans amid a credit crunch, especially at the peak season to prepare for Lunar New Year (Tet).

The SBV last week raised the 2022 credit growth target for the domestic banking system by 1.5-2 percentage points from its previous target of 14%, allowing commercial banks to pump an additional 240 trillion VND into the economy.

According to the SBV’s Deputy Governor Dao Minh Tu, the revision offers banks relatively large room to provide funds to businesses, inpiduals and the economy.

Under the new policy, BIDV, for example, has been allowed to lend an additional 27 trillion VND, while the amount for Vietcombank is 5 trillion VND.

A survey of the National Private Economic Development Research Board showed a severe lack of capital in businesses across industries after combating the COVID-19 impacts for two years, leaving them at risk of being unable to maintain operations and production, purchase raw materials, and pay salaries.

High credit growth rate in the first half of 2022 caused many banks to run out of their credit growth quota granted by the SBV and they couldn’t continue to lend to meet the capital needs of firms and people. Some banks had to stop receiving new loan applications for the last two months as they used all their granted credit growth quota.

Enterprises in Vietnam had faced difficulties in having access to capital for the past several years, but only in the past 12 months has the situation become more serious.

Worse could still come as the country’s largest holiday Tet approaches and enterprises with business models that revolve around Tet need capital to import goods. They also need money to settle debts, as well as pay salaries and Tet bonuses to their employees.

The increase in credit growth cap at the last month of the year when businesses are in dire need of capital to fulfil their production and business plans to prepare for Tet is considered a timely and positive move to help businesses, and the economy as a whole.

According to experts, the credit growth cap expansion will increase the working capital of enterprises, rather than serve investments or real estate projects.

Banking expert Can Van Luc said raising the credit growth cap is one of the important solutions to deal with the problem of capital bottlenecks of the economy in the short term.

The expansion will also help enterprises build momentum for economic growth next year, explaining that if the SBV waits until 2023 to expand credit, it will be hard to restart a system that has been suspended for a long time.

According to Lam Thuy Ai, Chairwoman of Mebipha Trading Production Company, the news that the SBV raised credit room is very positive, helping many businesses, including her company, have more opportunities to access capital to reactivate their production and business plans in 2023.

Minh explains interest rate has increased strongly since August this year as the room for credit growth was limited while capital demand was large. Therefore, when the SBV grants more credit quota for banks, lending rates will tend to cool down gradually in the short term.

Minh believes the credit growth cap expansion of 1.5-2 percentage points, or 240 trillion VND, will not significantly affect the country’s inflation, especially when global commodity prices, including oil prices, tend to cool down. Vietnam’s inflation has averaged 5% since 2013, meaning that inflation, which currently stays at 4.5%, is still below the average rate.

According to the SBV’s Deputy Governor Dao Minh Tu, local banks that meet liquidity requirements and offer low lending interest rates are prioritised for the increase in credit growth cap this time.

The SBV sees it needs to impose credit growth restrictions on lenders with high interest rates. Banks that have not reached the cap do not need a quota increase for now.

However, banks need to actively mobilise deposits to have enough funds to lend. Despite the extra lending room, Vietnam’s credit growth must follow the safety of lending activities and liquidity.

Saigon Securities Incorporation (SSI)’s analysts also said the pressure on banks to balance capital is huge. Liquidity in the banking system in the medium term has yet to improve as deposit growth is much lower than credit growth. By October 25, credit surged by 11.5% against end-2021 while mobilised deposits rose by only 4.6%.

Several banks and analysts forecast the increased credit quota would not result in a major influx of cash into the economy since many lenders have reached or exceeded the safe loan-to-deposit ratio (LDR).

Yuanta’s Minh said according to the current legal regulations, banks are allowed to lend up to 85 VND out of every 100 VND they mobilise, but 16 out of 27 listed banks had reached an LDR of more than 100% by the end of the third quarter.

Under the decision on the credit growth cap expansion, the SBV also directs commercial banks to prioritise capital for production and business activities; priority sectors such as agriculture, rural development and export; small and medium enterprises; and supporting industries.

Businesses also agreed, saying the new policy should be limited to beneficiaries with proven track records, as well as those in manufacturing, export, and agriculture sectors that have already secured orders they need to fulfil./.