Cuba’s First Deputy Minister of Foreign Affairs Gerardo Peñalver Portal has highlighted the comprehensive and close-knit cooperation between Vietnam and Cuba through different channels, including between the two countries’ Parties, States, Governments, and foreign ministries. 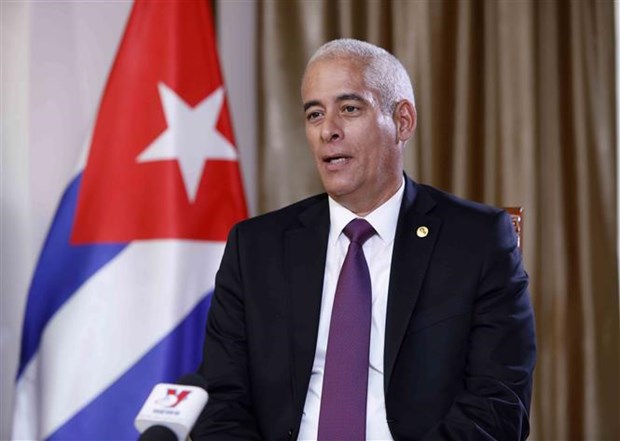 Cuba’s First Deputy Minister of Foreign Affairs Gerardo Peñalver Portal has highlighted the comprehensive and close-knit cooperation between Vietnam and Cuba through different channels, including between the two countries’ Parties, States, Governments, and foreign ministries.

Deputy Minister Peñalver Portal is paying an official visit to Vietnam from August 28 to September 1 to co-chair the 7th political consultation between the two foreign ministries.

In an interview granted to Vietnam News Agency, he said the fraternal solidarity between Vietnam and Cuba, founded by late Presidents Ho Chi Minh and Fidel Castro and nurtured by generations of the two countries’ leaders and peoples, has become a traditional and sustainable relationship that needs to be maintained and passed down to future generations.

He revealed that a number of high-level meetings and visits by the countries’ leaders will take place in the time ahead, adding they will jointly hold a ceremony in 2023 to mark 50 years since President Fidel Castro’s historic visit to the liberated zone in the south of Vietnam.

Talking about economic and trade ties, he noted Vietnam and Cuba have been implementing major projects in agriculture, food security, energy, construction and biotechnology. Vietnam is currently the biggest investor and the second largest trading partner of Cuba in Asia.

The two countries’ special relations can be seen in their mutual assistance in the COVID-19 fight, Peñalver Portal went on, saying Vietnam donated the Cuban people with tens of thousands of tonnes of rice while the Caribbean nation donated vaccines and sent experts to help the Southeast Asian country fight the pandemic.

Shortly after the oil terminal fire in Matanzas province, Vietnam extended sympathies to Cuba and was one of the first countries to make donations to the Cuban people’s efforts to address the consequences, he added.

The official appreciated the Vietnamese people’s warm sentiment and solidarity with Cuba.

He added that with a dynamic and successful economy, Vietnam is an example for his country to follow as it updates its socialist socio-economic model./.