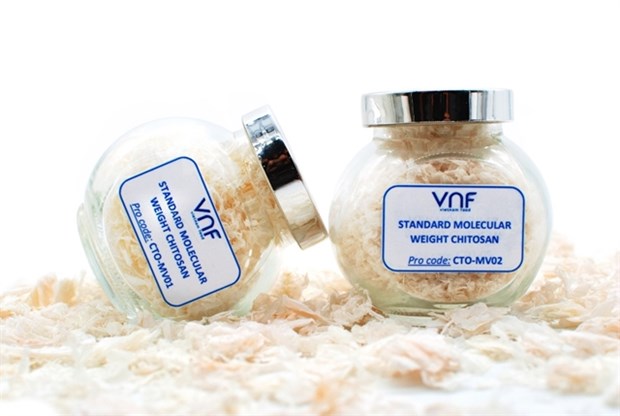 A VNF’s chitosan product. Chitosan and its derivatives provide huge profits for the firm thanks to its strong bioactivity effects and perse applications. (Photo vnfoods.vn)

As nearly one million tonnes of aquaculture waste are discarded annually, some firms have begun to seek ways to reclaim the waste and prevent it from posing a risk to the environment.

Vinh Hoan Corporation extracts proteins from fish waste for use in cosmetics and pharmaceuticals.

About 19% of its revenues come from aquacultural byproducts and 7% from the recovery of collagen/gelatin.

Tam said her company launched its first collagen/gelatin plant in 2015 with an annual capacity of 2,000 tonnes. The plant was the first of its kind in Vietnam.

In 2021, Vinh Hoan’s aquacultural byproducts and collagen/gelatin products raked in over 2.2 trillion VND, of which the latter contributed 642 billion VND.

Nam Viet JSC has recently followed suit with a plant of 780 tonnes. As a result, insiders estimate that the market of collagen products will grow by 6% annually, reaching roughly 8 billion USD by 2027.

Vietnam Food JSC (VNF) is profiting from the re-utilisation of shrimp waste.

Phan Thanh Loc, Vietnam Food CEO, revealed that the biopolymers derived from shrimp heads, such as chitosan, are highly profitable as they are integral to anti-obesity and anti-fibrinolytic medications.

In his estimation, shrimps’ value would rise about five times should they be reclaimed into animal feed, twenty times into functional foods and thirty times into pharmaceuticals.

Unfortunately, most shrimp producers opt for animal feed because of the costs of investing in high-tech equipment.

Sao Mai Group JSC is another big name that has successfully turned pangasius fat into high-valued products, including cooking oil, shortening and margarine.

Experts estimated annual aquaculture waste at approximately one million tonnes. Such an amount of waste, if left untapped, would cause severe damage to the environment.

“If we can employ technology to turn 320,000 tonnes of annual shrimp waste, it would yield tens of billions of dollars”, said Tran Van Tung, Deputy Minister of Science and Technology.

However, there is still ample room for improvement. Reclaimed agricultural waste in Vietnam stood at just 275 million USD in 2020, far lower than the above figure.

Insiders underscored the inaccessibility of bank loans as the main reason for the slow pace.

“Firms have proclaimed for years that they do not need government financial support. Instead, they need readily-accessible bank loans and land slots”, said Bui Ba Bong, former Deputy Minister of Agriculture and Rural Development.

Firms need bank loans to fund their research and development of new reclamation methods and obtain high-tech equipment that can put the methods into use. Unfortunately, bank loans are generally difficult to obtain as most banks are cautious about financing such ventures.

The situation is no better for firms seeking government financial support, as access to the money involves a lengthy administrative process.

“It is not easy to get hands-on financial support because of cumbersome procedures”, said Vo Quan Huy, Director of Huy Long An Co. Ltd.

Le Hang, Communication Director of the Vietnam Association of Seafood Exporters and Producers, estimated annual seafood output at 8 million tonnes, of which aquaculture byproducts and waste account for nearly half.

She called for favourable policies to develop aquaculture byproducts and waste reclamation into an independent industry to fully unlock their economic potential.

“Ministries should put aquaculture byproducts and waste high on its agenda and regard their reclamation as an independent industry”, she said.

She also called for a mechanism to encourage firms to invest heavily in the industry for the good of the environment.

According to the Department of Science, Technology and Environment under the Ministry of Agriculture and Rural Development, up to 90% of aquaculture waste is reclaimed annually but predominantly into animal feed, a low-valued product.

The department believed that the waste would become a money-spinner for firms should they pour sufficient finance into high-tech equipment, which allows for the manufacturing of higher-valued products./.